As many know, UI/UX design is largely focused on creating easy to understand navigation. Whether that’s accomplished with skeuomorphism or flat design doesn’t matter as long as users don’t feel frustrated with the designs. Users want designs where they feel in control of the navigation.

Amazon’s website even in 2019 seems to contradict the basic rules of modern web design. You’re bombarded with rows and rows of seemingly unorganized categories. This is an instance where users can get “lost” but they don’t feel betrayed by the overdose of content because it’s marketed and suggested to be a journey of exciting products that are curated to your interests. 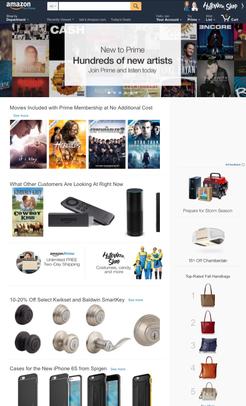 This was covered a bit before with the future of ads and the UI omnipresence articles. Designs that guide your ideas and permeate space without feeling invasive. However, that’s assuming there will be a significant market going forward for visual interfaces.

Graphic design in the 21st century has still relied on old visual ideas such as the rule of thirds or color psychology. Visual cues that guide your eyes in a specific way while you feel in control of them.

But – we’re entering an age of Zero UI. A time with voice-based interfaces (i.e, Alexa), gestural interfaces (i.e, Xbox Kinect), and automated secretaries that can book appointments and message others for you. The goal of Zero UI is to eliminate as many screens from a person’s daily routines as possible.

But this doesn’t mean visual interfaces won’t be relevant. In fact, they’re expected to seep even more into our daily environment. The future of visual user interfaces will come in two significant categories – Augmented Reality (AR) products and the Internet Of Things (IOTs).

UI will have to become insanely conscious of surrounding environments. The Internet Of Things trend will eventually bring out smart homes with digital display walls, refrigerators, counters, and more. The “kiosks” of the future city will simply be building walls or street corner displays. Smart trash bins will display and understand usage statistics. Clothing might even have shiftable displays, though the smart clothing of the future might do away with the idea all together in favor of haptic feedback due to the closeness of the material. Screens will be everywhere but they won’t feel overpowering just omnipresent.

The second trend in tech that will impact UI is Augmented Reality (AR). Digitally augmented windows or lenses can display the weather or describe information in your view that would be of interest to you. AR glasses could highlight important items in your view or shift scenes like with Snapchat’s lenses. The key to widespread use would be in realism. Making the digital images accurately track the real world environments and imitate the surface lighting and shadows.

So while Zero UI will eliminate the focused personal phone screen time of today, the future of UI will still involve visuals and will have to be flexible and very transportable to a variety of interfaces including 3D curved surfaces and environments (I mean until thought-based user interfaces become a thing 0_0…).